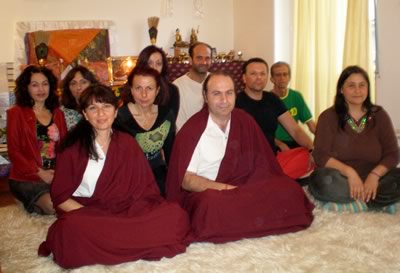 Some members of Samten Tse Athens, Greece gather in the shrine room of the centre in Athens

Her Eminence Minling Jetsün Khandro Rinpoche visited Athens, Greece and taught for the first time in 1993, where her presence and direct approach to dharma created a particularly strong and positive impression to all. Since 2003, Her Eminence has been visiting Greece regularly. Because of the inspiration that was born in Rinpoche’s presence, in June of 2005 a centre for Tibetan Buddhist studies and practice was established under her spiritual auspice, called Samten Tse Athens. The centre has a regular program of teachings, study and practice and day-long intensive practice. Yearly visits by Rinpoche, with an on going program of teachings is also conducted at the centre. Lama Stamatis and Lama Katerina head Samten Tse Athens under the guidance of Jetsün Khandro Rinpoche.

Rigdzin Gatsal (The Joyful Garden of the Awareness Holders), a peaceful and mild land of 32,000 square meters, located on mount Parnonas on the south-eastern side of the Peloponnesus, is a wonderful new land which will become a retreat centre in the near future.

Lama Stamatis Politis entered the 1st three years retreat in 1986 and later in 1995, he started the program of the 2nd three years retreat under the guidance of his first teacher Lama Gendun Rinpoche of the Kagyu tradition. After the retreat program, together with Lama Katerina, he stayed in a mountain retreat centre practicing and translating dharma texts into Greek and in 2005 they returned to Athens and, under the spiritual guidance of Jetsün Khandro Rinpoche formed Samten Tse of Athens, the city centre and now expanding with Rigdzin Gatsal, the retreat centre. Lama Stamatis has also received many teachings and transmissions from teachers of the Kagyu and Nyingma lineages and is also actively involved in the Dharmashri Foundation as the translator for Jetsün Khandro Rinpoche in Greece.

Lama Katerina Loukopoulou also completed the three years retreat under the guidance of Lama Gendun Rinpoche. In 1993, she met Jetsün Khandro Rinpoche in Athens and became her student and since then she has helped establish Samten Tse in Athens. Lama Katerina has received teachings and transmissions from both the Kagyu and Nyingma traditions and she is also a member of the Dharmashri Foundation.