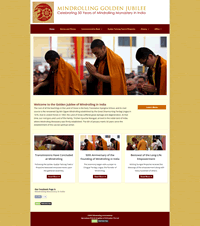 The root of all teachings in the Land of Snow is the Early Translation Nyingma School, and its river source is the renowned Og Min Ogyen Mindrolling established by the Great Dharma King Terdag Lingpa in 1676. The world was ornamented with the resonance of the Three Vehicles by the endeavours of Chögyal Terdag Lingpa and the great translator Lochen Dharmashri. The teachings of the Eight Practice Lineages in general and the Kama, Terma and profound lineages in particular, were rekindled and thrived again through their unsurpassable activities. Thus, great scholars and learned ones proclaimed Og Min Ogyen Mindrolling as the source (chu go) and all praise it unanimously.

The 6th of January 2015 marks the passing of 50 years since the establishment of this sacred spiritual centre.