Lochen Dharmashri received the Refuge and Bodhicitta Vows from Terdag Lingpa, who was his principle guru. At the age of twelve, Dharmashri received the empowerment of Rigdzin Thugthig (The Heart Essence of the Vidyadharas) from Terdag Lingpa, due to which his mind matured, and the pratimoksha and bodhicitta vows which he later received arose as the essence of the discipline of secret mantra.

When Dharmashri was fifteen, he received novice monastic vows from the Fifth Dalai Lama, from whom he also received full ordination when he reached the age of twenty. Fulfilling the instruction of the Dalai Lama, he later received the pure lineage of the Lower Tibetan Vinaya of the Nyingma. This was the Vinaya lineage from Kham which had survived the persecution of the buddhadharma by King Langdharma; Dharmashri became a great preserver of this tradition, widely propagating its explanation and practice. He and his elder brother, Terdag Lingpa, both sought out the great doctrine holders of the time, and received an enormous number of transmissions on an equally vast number of topics. 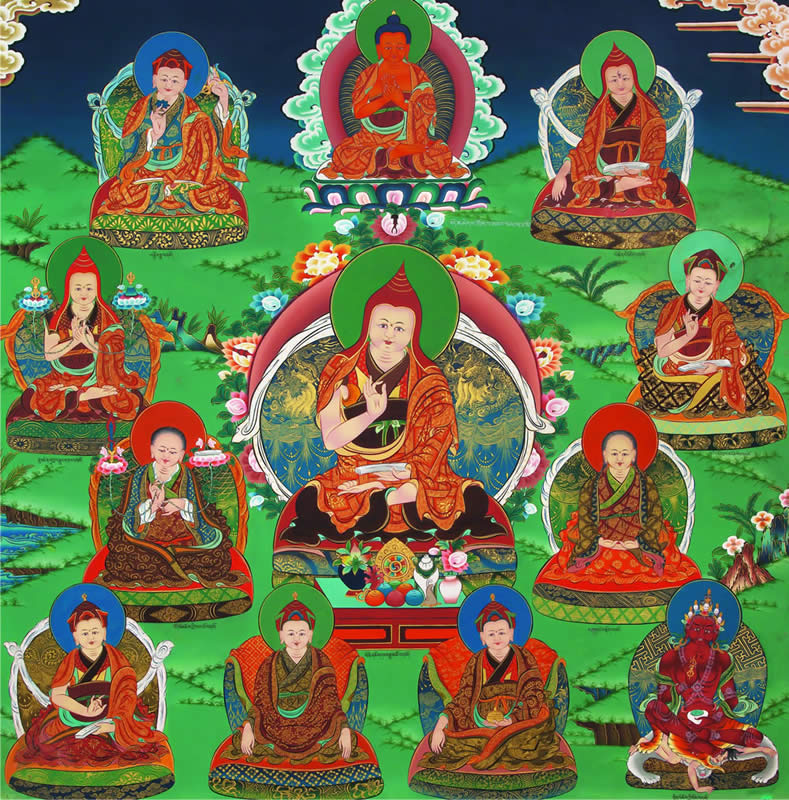 Lochen Dharmashri as depicted in a mural

Lochen Dharmashri became particularly renowned as a great scholar of his time. The depth and breadth of his learning was truly impressive. Among the subjects he mastered were ceremony and ritual, Indian and Chinese astrology and divination, the chants and dances of the Nyingma lineage, Vinaya, Abhidharma, Prajnaparamita, as well as the the complete collection of the Nyingma tantras. In addition, he completely mastered all branches of linguistic skill, including grammar, prose, and poetry.

Lochen Dharmashri authored one of the most famous treatises of the Nyingma School, the Lochen Kabum. These twenty four volumes of his collected works begin with his unprecedented writings on the intentional meaning of The Sutra Which Gathers All Intentions (Dupa mdo) and The Magical Net (Gyutrul Drawa), in the form of great commentarial expositions. His commentaries on the Guhyagarbha Tantra—the Sangdag Gongyen and the Sangdag Shelung—are famous for their clarity and eloquence.

His teaching activity was also inconceivably vast. It is said that Lochen Dharmashri taught all of the subjects, the empowerments, transmissions and oral instructions, which he had studied not less than three of four times each. He gave full ordination to appproximately five hundred monks, and from the time he was forty-eight until the time he was sixty-four, he taught the Guhyagarbha Tantra continuously to about sixty students.

The Death of Lochen Dharmashri

In 1717, the Dzingar Mongols invaded Tibet and began destroying monasteries. Being in Central Tibet, Mindrolling was an easy target of this as well as other invasions and was brutally attacked. Lochen Dharmashri was one of the many who were slain on that day.