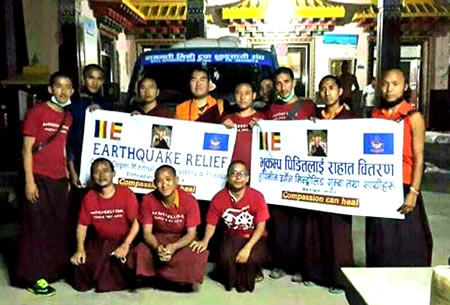 Monks gather for a photo before departing to earthquake area.

Many monks and nuns from Mindrolling were in Nepal during the time of the devastating earthquake that struck Nepal in April of this year.

Most of them were on their summer break visiting families and many were also gathered for transmissions being bestowed by Kyabje Yangthang Rinpoche. Seeing the immense destruction and need required, the monks of Mindrolling immediately set into action under the direction of Venerable Tulku Dorje Bum (Tulku Lhundrup Tengay).

With the support of the rinpoches of Mindrolling and generous donors, Mindrolling immediately began the process of sending funds to enable the tulkus, khenpos and monks of Mindrolling in joining efforts to provide relief to the thousands of victims of the earthquake.

Mindrolling has provided tents, tarps, food, blankets, clothing and medicines to numerous people facing great difficulty and need after such a catastrophe. Helping set up shelters and relief, the monks also travelled into remote villages of Sindhupalchowk where the devastation and heavy rains after the earthquake caused much damage and deaths. Thousands here received help with great gratitude.