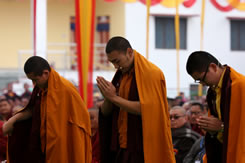 Tulkus of Mindrolling offer a prayer at the beginning of Founders Day observances.

From January 4—8, 2015 Mindrolling Monastery celebrated its Golden Jubilee—marking 50 years since the founding of Mindrolling in India.

On 6 January 50 years ago, Mindrolling Trichen Gyurme Kunzang Wangyal, Kyabje Dzongnang Rinpoche and Kyabje Khochhen Rinpoche founded Og Min Ogyen Mindrolling in India. In these first fifty years, thanks to their vision and efforts, Mindrolling has kept alive and rekindled the sacred traditions, rituals and arts of Tibetan Buddhism, just as it has done for 339 years in the noble land of Tibet.

On January 6 2015, as part of the Jubilee celebration this important anniversary, Founders Day was marked with much fanfare—ceremonies, speeches and entertainment.